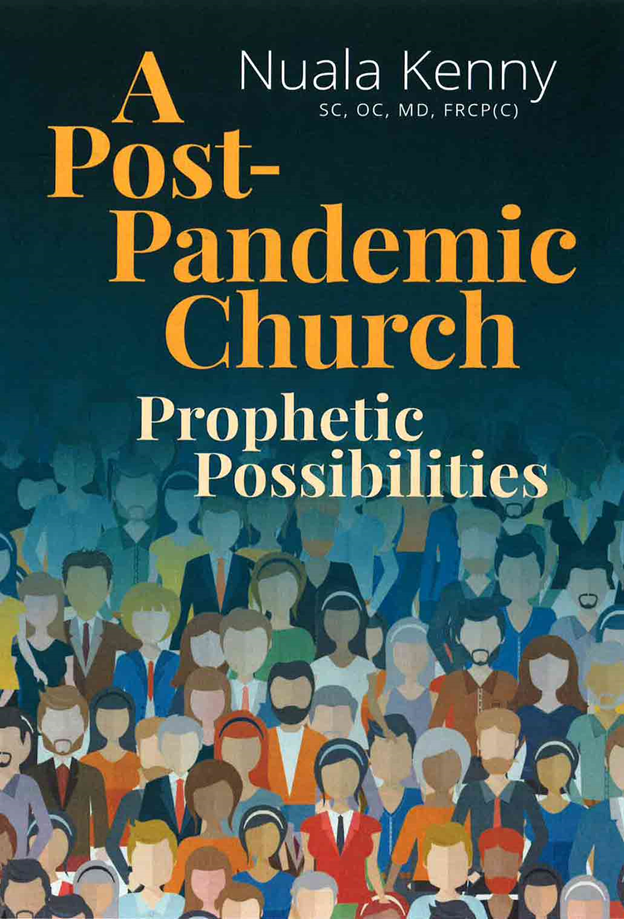 Despite his faithful and wondrous witness to the apostles of God’s boundless love, Jesus must constantly reassure them to trust in times of turmoil and doubt.

“I ask not only on behalf of these, but also on behalf of those who will believe in me through their word, that they may all be one. As you, Father, are in me and I am in you, may they also be in us so, that the world may believe that you have sent me.” (John 17:20-21)

Jesus’ ministry of healing and reconciliation reveals the dynamic loving unity of the Trinity. However, Scriptures reveal that divisions developed early in the life of the Church about issues such as accepting Gentiles, circumcision and fasting so that Paul was compelled to write:

Jesus promises the Holy Spirit to strengthen and guide his disciples through the perils of history.

“I shall ask the Father and he will give you another Advocate to be with you forever…I will not leave you orphans.” (John 14:16-18)

Pandemic has provided an unprecedented experience of fear and uncertainty for wealthy and poor across the globe.

COVID-19 has also taught harsh lessons regarding the risky business of prognosis, which is predicting outcome, as the constant evolution of new and more toxic variants after victory had been celebrated, confounding any sense of control.

Tragedy fatigue and ongoing denial of the harms of the virus and mechanisms of transmission compromise recovery.

Pandemic has revealed heroic examples of the most caring and courageous in humankind and its selfish worst.

Science tells us we will never be the same so we have the opportunity to choose which direction we will take in the post-pandemic world, if we accept it.

Polarizing divisions about the direction are fracturing the Body of Christ and threatening healing and renewal.

The call to conversion and healing

Tragically, this call comes at a time when many have left the Church and we are experiencing challenges to faith and religion from secularism and science. We have seen the need for mourning and that repentance and atonement are central in moving forward. There is work needed to make amends in the care of those harmed and in the repair of toxic culture and practices. We are all challenged to “undertake a resolute process of discernment, purification and reform” (Evangelii.Gaudium no.27). Hope and trust in the power of the Holy Spirit is essential.

Conversion of minds and hearts to the mission, words and witness of Jesus is necessary because:

“Changing structures without generating new convictions and attitudes will only ensure that those structures will become, sooner or later, corrupt, oppressive and ineffective. (Evangelii.Gaudium no.189).

The marks of the Church are that it is one, holy, catholic and apostolic. Unity is the first mark. The Church’s unity is that of a communion of difference that witnesses to the catholic dimension of God’s grace. This true meaning of catholic is neither divisive nor oppressive but gathers up genuine difference in an inclusive wholeness.

From the beginning there have been differences of opinion about how to be a disciple of Jesus and how to be the Church of Christ. Polarizing divisions are more than legitimate differences arising from time, place and culture. Polarization is about opposing and irreconcilable beliefs, and the organization of all life around the belief. The poles identify themselves against each other and judge right or wrong, holy or sinful according to the party line, and not according to “the mind of Christ.”

Sadly, in this time when we all need to be committed to healing and renewing the Church, polarizing divisions, rooted in a failure of reception of the reforms of Vatican II and opposition to Pope Francis’ vision, are fracturing the Body of Christ, compromising healing and confounding prognosis. These often vicious divisions in the Church manifest deep pathology and are even seen in leadership such as national episcopal conferences. The Church in the United States is a dramatic example of these divisions with wealthy and powerful lay groups supporting conservatism in sexual morality and libertarian economics.

In his closing remarks at the 2019 Summit on the Protection of Minors, Pope Francis noted:

“To achieve that goal [healing], the church must rise above the ideological disputes … that often exploit, for various interests, the very tragedy experienced by little ones.”

Tragically the Eucharist, source and summit of unity has itself become a sign of division. The 1963 Sarcosanctum Concilium Constitution on the Sacred Liturgy described a vision of liturgical renewal ministering to one another and “wholly celebrant.”  The Mass had become a ritualized performance celebrated by priest with lay as observers in the audience. This mirrored the dominant, active clergy and passive lay distinctions in the rest of Church life. The Mass was restored to a meal of friends gathering to give thanks, eat and be nurtured and then sent forth to share with the poor and those “on the peripheries.” There has been ongoing resistance to liturgical renewal and other reforms of Vatican II.

Pope Francis has returned to the task of renewal begun in Vatican II. Concerned that the Eucharist had become a sign of deep division, he surveyed global practice. Results showed wide divisions that in effect are schismatic. In July 2021 Pope Francis Apostolic Letter Traditionis Custodes said “a firm decision to abrogate all norms that precede the document…”liturgical celebrations are not private actions but celebrations of the Church.” They should be signs of unity. This is not about Latin but the essential question of Jesus’ command to “do this” in his memory and the nature of “this.”

Lessons: We must reject polarizing differences and repair the unity of the Body of Christ.

I have loved and prayed for Pope Francis from the moment he stepped out onto the balcony in Rome; greeted the crowds; and bowed his head and asked for the blessing of the crowd before he gave them the revered Pontifical Blessing. I knew he was something different and an answer to my prayers for a pastoral Pope. Since that day he has been a remarkable witness to humility and care and concern for the vulnerable and those on the peripheries, not the wealthy and powerful.

Pope Francis, in the Jesuit tradition of discernment, has also provided brilliant diagnosis of many of the pathologies in his identifying of the temptations of the Church and diseases of leadership.

He has courageously called for:

a missionary impulse capable of transforming everything, so that the Church’s customs, ways of doing things, times and schedules, language and structures can be suitably channelled for the evangelization of today’s world rather than for her self-preservation!

He warns of the need for discernment regarding the transformation of structures, policies and practices with the “mind of Christ” so as to not enshrine new pathologies as we move into the post-pandemic Church.

Pope Francis, the first Pope ordained after Vatican II and the first from the New World, has freed the Church from its white European constraints, reinvigorated ecumenism and resuscitated the reforms of Vatican II. He has been a powerful force for re-founding the Church in the model of servant leadership for a global community. In Fratelli tutti, where he condemns rampant consumerism, racism, the exclusion of persons with disabilities and the elderly, and the rejection and mistreatment of migrants and refugees.

His encyclical Laudato si’, has had profound impact on bringing the ecological/environmental crisis to governmental bodies.

He has freed moral teaching for a new balance between law and mercy and revitalized theology.

He has established the principle of synodality in the Church and created an unprecedented opportunity for renewal with the participation of all in the 2023 Synod on Synodality.

He calls us all to be prophets.

In Pope Francis’ dream for the Church he uses the social action elements of seeing, judging, acting.

This is a time to see through prophetic criticism the dis-connect between who we have been called to be by baptism and pandemic revelations of deep personal and ecclesial pathology.

This is a time to judge the injustice revealed in pandemic using the Gospel and Catholic social teaching, especially regarding the common good and the preferential option for the poor.

This is a time to use prophetic imagination to see new ways of being the People of God in the circumstances of our post-pandemic Church and world and enact them:

Revitalize faith and prayer leading to new commitment to discipleship in the post–COVID-19 Church.

Restore Jesus’ servant leadership replacing a culture of power and control in the Church.

Break silence and denial on ecclesial sin with a new culture of openness and practice of meaningful dialogue and synodality at all levels of the Church.

Renew moral theology and revive the revered tradition of formation of conscience and formation in virtue.

Restore the full, active participation of all in the liturgy.

Promote a new flourishing of parish life characterized by hospitality, inclusion and the ministry of care.

Reject clericalism and restore relationships in the Church based on the recognition of the gifts of all clergy and laity, women and men.

Increase the appointment of lay women and men to the College of Cardinals and other leadership positions.

Renew Christian anthropology and our theology of sexuality.

Lesson: The post-pandemic Church can emerge reformed and renewed if we accept the prophetic challenge.

Pope Francis reminds us that there are obstacles to the prophetic:

Narcissism makes you look at yourself constantly in a mirror; discouragement leads to complaining and pessimism to thinking everything is dark and bleak. These three attitudes close the door to the Holy Spirit. (Homily of His Holiness Pope Francis, 2020, Jun 29). Can we resist these obstacles and trust in the power of the Spirit?

He also warns us of the destructive force of indifference and challenges us to develop antibodies to it as we move forward.

Lesson: This is a Calvary time for the Church. What has atrophied and corrupted must die in order for the new life of the Resurrection can heal. We know that our Redeemer lives.

If anyone is in Christ, there is a new creation; everything old has passed away; see, has become new! (2 Corinthians 5:17)

The Church needs action while Francis is Pope because tragedy fatigue and resistance to conversion and reform are powerfully present in the Church. His successor will be a crucial element in the next chapter of our story of faith. Audacious hope and trust in the power of the Holy Spirit are needed as never before. The commitment and charisms of all are need to ensure that the lessons of pandemic move us to be more loving, just and caring disciples in the world to come.

What personal conversion of mind and heart is calling you?

What are the key theological beliefs and practices in need of renewal to the mind of Christ?

What are the central organizational and relational issues are in need of renewal and reform?

Pope Francis with Austen Iverleigh 2020 Let Us Dream: The Path to a Better Future, Simon and Schuster, NY.

George Weigel 2019 How the Church Rediscovered Itself and Challenged the Modern World to Reform, Basic Books, NY